As I recently reported in my companion post, the West Nest on the property has been occupied for at least a week.  I was beginning to lose hope that the East Nest would be active this season.  This latter nest is pretty much right outside my window, and so is in an ideal location for me to observe and document the comings and goings.

Why was I doubtful?  Well, our friendly neighborhood landscapers had pretty much scalped the tree during their annual deforestation this past summer, so the nest is much more exposed than in previous seasons.  I was concerned that this would discourage the birds from using the nest.  Fortunately, my fears were unrealized 😎

Below are a few early pics and videos for the East Nest pair.  I have recently ramped up my efforts to capture good videos using my Nikon D5600, coupled with a 300mm zoom lens.  I hope you find my initial efforts below to be entertaining.  I will update the story as the season unfolds.

Playing Hard to Get

Our first sighting this season was on Saturday, March 21.  Here is the mated pair getting (re)acquainted with each other: 1

In the case of yellow-crowned night herons, I find it virtually impossible to distinguish the male from the female by appearance.  For my untrained eye, behavior provides the necessary clues.  (See the videos below.)

You can be forgiven for thinking that this bird is simply having a bad hair day:

As I watched this scene unfold, however, it appeared to me that this fellow had deliberately raised his head feathers as he walked along the branch.  After a little digging, I discovered that raising the crest feathers is a form of greeting between night herons.  (This is consistent with the fact that the mate was just off-camera to the right.)

When they aren’t standing absolutely motionless (which they do a lot!), night herons can often be seen preening and cleaning.  They clean their flight feathers by grasping individual feathers between the upper and lower beak, and scraping downwards:

One of the more intriguing rituals practiced by these birds is the male mating display.  Words do not suffice to describe this behavior, so here is a video:

You’re impressed, right?  Maybe so, but females can play very hard to get.  I find the video below to be absolutely priceless.  I felt sorry for the poor chap:

The male night heron trying desperately to make a good impression on his mate.  (Nikon D5600 with 300mm telephoto lens.)

Oh, well…Maybe she’ll be in a better mood tomorrow.

I have to admit that I was starting to get worried.  The female in the West Nest has been busy incubating her egg(s) for some time now.  However, I was seeing a lot less activity in the East Nest, and was getting concerned that this might be a nonbrooding season for the pair.  Why would this be so?  Well, there has been a fair amount of disruptive activity in the immediate vicinity of the East Nest, including two visits from landscapers aggressively trimming branches and pulling out dodder vines.  This might adversely affect breeding activities. 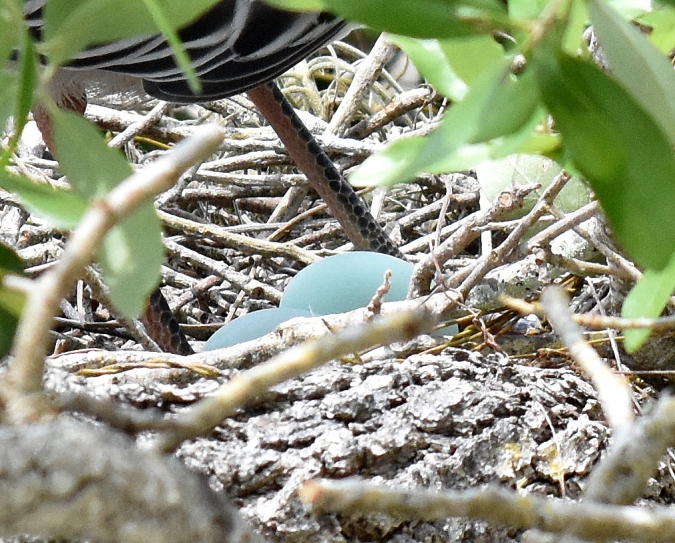 There may be additional eggs elsewhere in the nest, but I suspect that there are only two in this clutch.  As you can see, night heron eggs are generally a pale blue color.2  Very pretty indeed!

Btw in the above photo, I caught the female in the process of squatting on top of the eggs to continue the incubation process.  (She periodically takes a break from all that sitting!)

1 As I’ve stated in previous posts, the prevailing wisdom appears to be that the same mated pair get together each season, but this may be idle rumor.

2 The blue color is due to biliverdin, a pigment that is deposited on the eggshell before the female lays the eggs.  Humans have biliverdin as well.  It’s a product of the breakdown of red blood cells, and is what gives bruises their blue/green tint.

One Reply to “The Yellow-Crowned Night Heron: The East Nest Checks In”